An online forum for discussion of all things related to Penn State hockey. 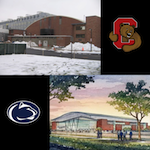 I'm more impressed about the games against SLU and Princeton! SLU last year made it to the NCAAs. 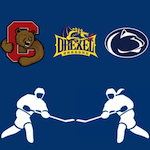 Syracuse just for the fact that the men and women are both opening at home on the same weekend and for the fact that Cuse is a name school for people who don't follow this stuff, the only other one in the league. That's going to be wild, as will the November weekend where the men have Air Force and the women play Robert Morris. We'll probably fare a lot better in the first one though.

But really, Mercyhurst is the measuring stick. They won every single regular season and tournament championship in CHA history until RMU upset them in last year's championship game. Yeah, the competition hasn't always been the best (apparently, Findlay, Niagara and Wayne State agree with that) but that's still ridiculous. I'd go them first, SLU second. 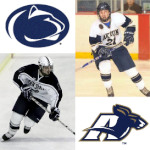 I think both games will really be telling about how the season (and those following) will go. Mercyhurst may win their conference regularly, but they definitely tend not to fare as well in the NCAA. SLU this year bested Cornell to gain the ECAC championship (something about which I'm still impressed), and nearly beat BC in the first round of the tournament.

The official schedule release: rather anticlimactic after it came out via the CHA a couple weeks ago, but still...

The only thing resembling a major change is that the opening series at UVM is now a Saturday-Sunday (10/6-7) instead of a Friday-Saturday. A few times were added/tweaked. One of those was the home opener against Syracuse, which is now at 7:00, not 2:00. So not only did they move the 10/13 men's game to Wilkes-Barre, but now I can't even attend one and watch the other because they directly oppose each other. Bravo, guys. Administration hasn't made many missteps so far, but that whole weekend is one.